This motorcycle is a rodeo of fun for any cowboy and cowgirl. Low slung, muscular and dressed in Metallic Spark Black the Vaquero will challenge any outlaw Bagger to a gun fight. (BUCKAROO: Derived from the word “Vaquero”, in Spanish, the letters B and V are both pronounced “B”)

At a price point of $16,799 MSRP the fixed faring Vaquero has its sights fixed on its competitors. In fact, almost every manufacture now offers a blacked-out, low profile motorcycle that’s directly in the Vaqueros crosshairs. It’s a striking motorcycle and everywhere I went motorcycle aficionados queried what brand was this bike. Kawasaki keeps branding to a minimum because the “Team Green” is not focused on big touring cruisers. I think they are spot-on with this year’s Metallic Spark Black paint scheme. The subtle stripes perfectly accent the Vaqueros lines

It’s time to mount this trusty steed and ride south to Eldorado. A tiny, unknown border town that hardly deserves such a grandiose name yet, this dusty little village is home to the best border bar and a saucy senorita serving icecold cervezas and craft tequila made by her family. 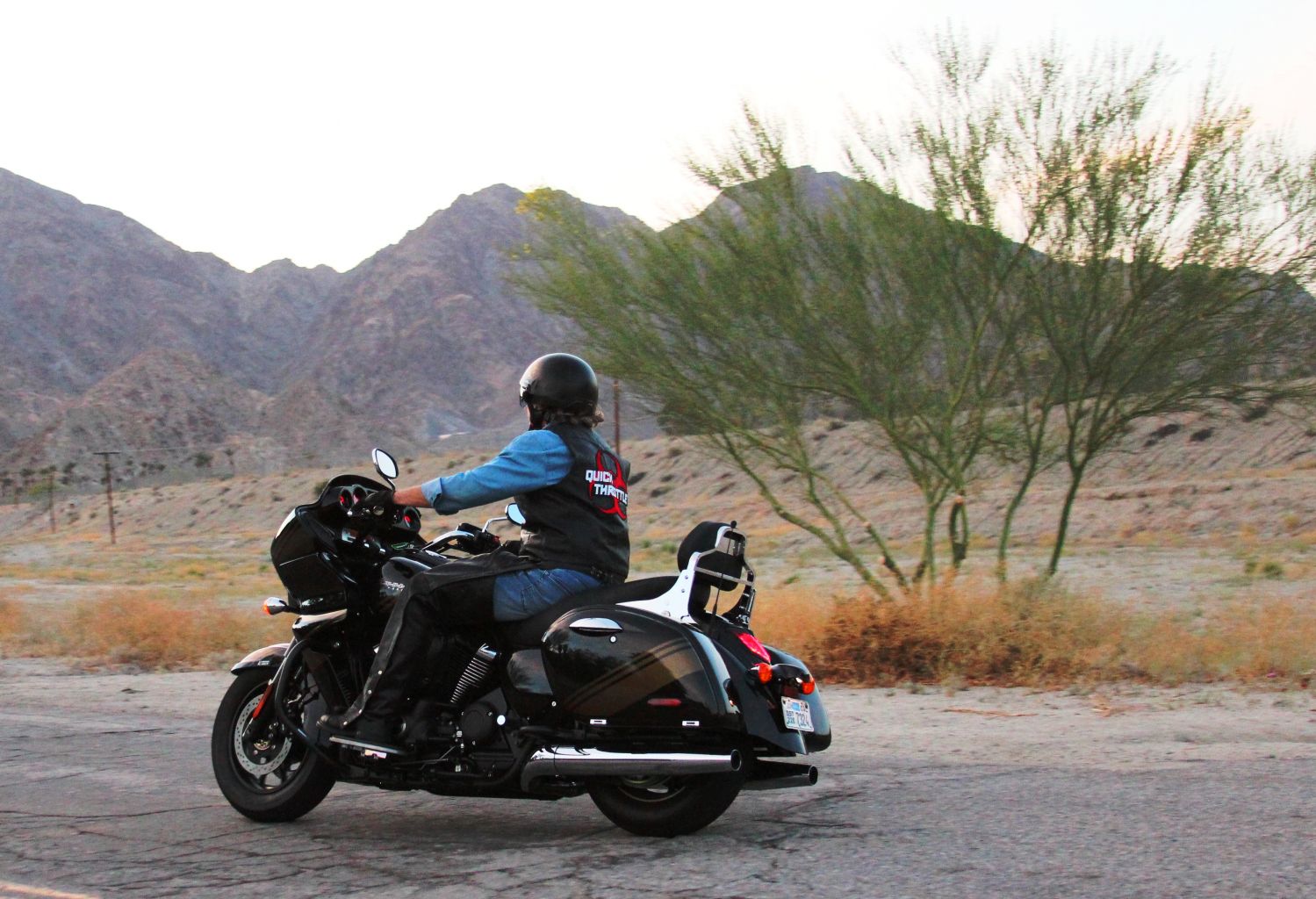 It’s a big bike weighing in at 845 lbs. wet but because it’s a fixed faring, you’re not muscling the extra weight of a fork faring and handles surprisingly well in the twisties. I caught up with a group of Dual Sport riders in the San Jacinto Mountains and kept on their tail. They were impressed at the cornering of this big buckaroo. Sure I was grinding the scrapers under the floorboards but I had plenty of room to go before hitting any real hard parts. (Lean angles are not noted in the Kawasaki specs.) 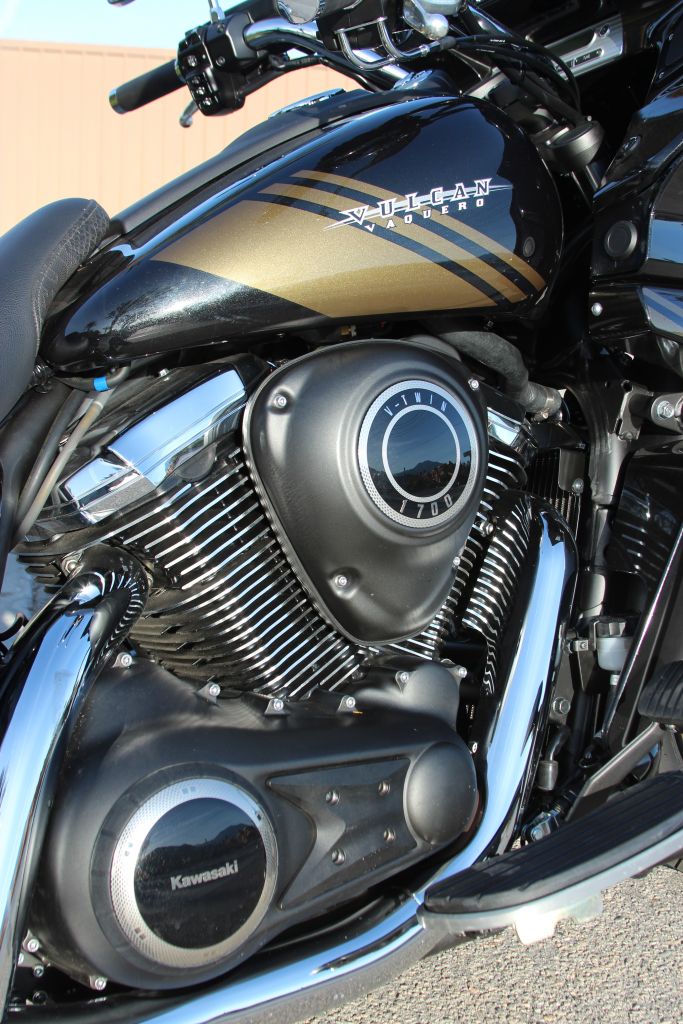 100 horses power this bike with 1,700 cc (103.7 cubic-inches) 52-degree V-Twin pushing 108 ft. lbs. of torque. Water jackets surround only the top quarter of the cylinders and the polished-edge fins match the cylinder heads while attractively tapering to the cylinder bases. The 9.5-to-1 compression ratio means regular gas will fuel this cowboy. A pair of 42 mm throttle bodies meter the fuel, and a six-speed, overdrive ratio transmission with a positive-neutral finder sends power down the carbon-reinforced drive belt. Dual primary engine balancers and rubber engine mounts isolate high-frequency vibration while a single-pin crankshaft provides that classic V-twin rumble and characteristic pulse.

This is a brand new bike and with only 200 miles on her I need to break her in. It’s a long lonely desert ride to Eldorado and I reminisce. I was returning from somewhere far too late at night, I was lost, very lost. The hard road became dirt road; I was fixated on a lone distant light, a beacon in the night. All riders know that where you look, is where you go and I was hypnotized in an ocean of blackness. Completely exhausted, I pulled into a tiny market. Here I was, in a phantom village with no gas station, no hotel, no cell service and no gringos. A large elderly Mexican woman with a broad smile welcomed me.

Cerveza? I asked. “El Nido” she replied and pointed towards the back of the market. Bins of fruits, spices and dry goods lined the walls. A crimson door decorated with ornately carved black wood and a sign, “El Nido” beckoned. It was a bar, not just any bar; it was something out of a David Lynch movie. A Dia De Los Muertos meets classic red velvet Hollywood vibe. Couples snuggled in booths as I sauntered through the dimly lit haze. She sat behind the bar, raven black hair, crimson lips, a sight to behold.

“This place is amazing,’ I said, “but you already know that, I’ll have your coldest beer.”

She pulled a Negra Modelo out of a bucket of ice, an iced mug from a freezer and slowly poured. I could see a frosty mist rising from the frozen mug. She smiled and handed me the beer. It was without a doubt, the best beer I’ve ever had
.
“Where am I?” I asked?

“You are in Eldorado, at the El Nido, “Heavens Nest” I call it. How in heavens name did you find it?’ She flashed a wicked smile.

Anti-lock Braking System (ABS) is incorporated into K-ACT to help prevent the wheels from locking during hard, straight-up braking for enhanced control.

For maximum controllability in tight corners or when making U-turns, K-ACT does not engage when braking is initiated at speeds below 12 mph. I tested this at 50 miles an hour on an empty road, he bike skidded to a stop completely straight. A meaty 130/90 x16 front tire and fat 170/70×16 rear help bite the roads.

Overdrive 6th gear reduces rpm at higher speeds and helps increase fuel mileage. It’s a tall 5th gear because the engine purrs at 3500 rpm at 75pm, I found that 6th really is overdrive. Kawai knows that big V-twin American motorcycles have to sound like they are being hit by a ball ping hammer every time you shift, because they do. Kawai also knows the low rumble of the V-twin exhaust note makes the man and the Vaquero is right on target. The stock exhausts allude to the thunder potential of a set of aftermarket pipes. 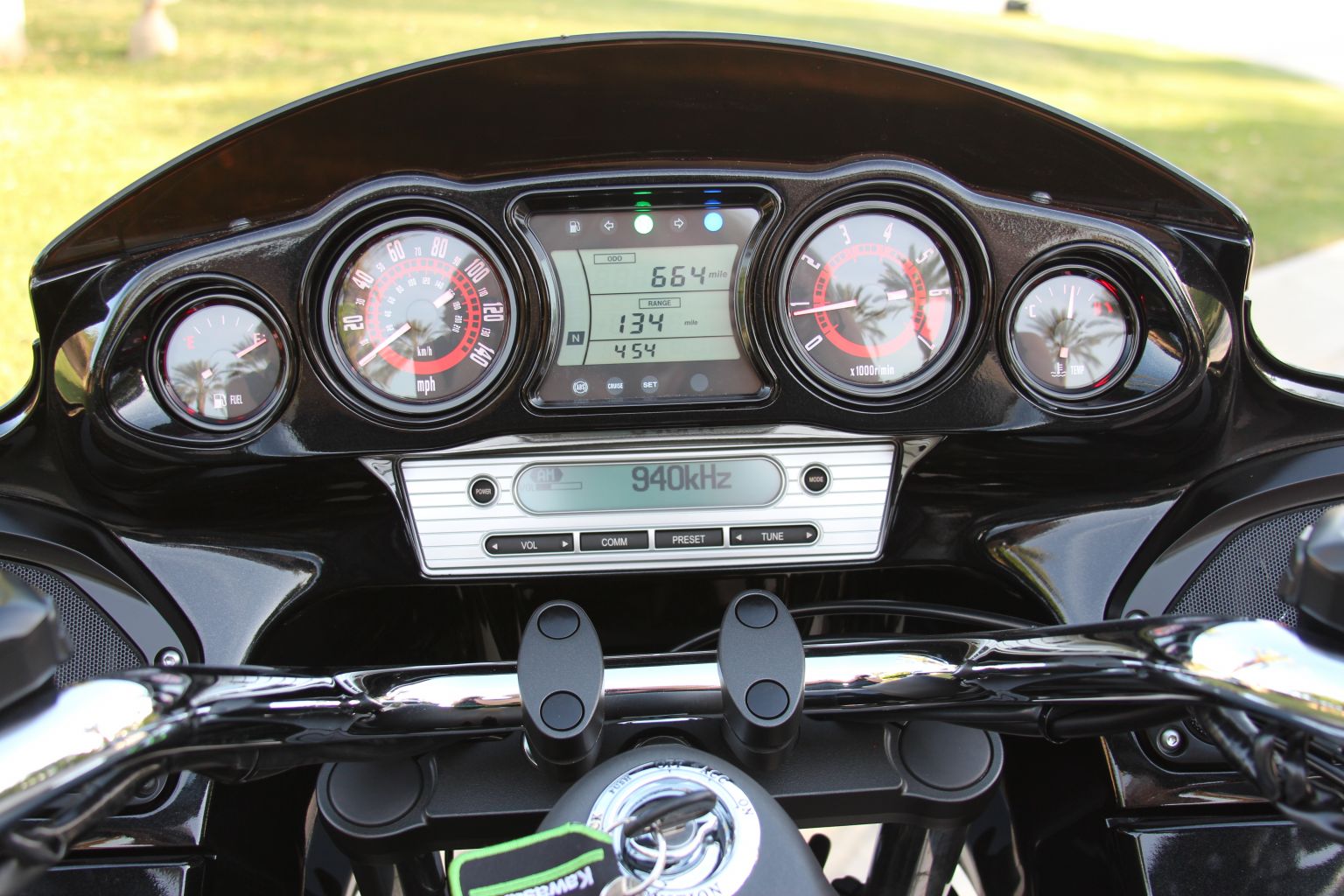 As far as dashboard electronics go the Vaquero sports a retro 1960s look. While other brands have upped the game with touchscreens and Bluetooth not much has changed in this department since its release. The dashboard has Analog instrument faces for mph and RPM. Digital displays include odometer, trip meter, clock, fuel range and average mpg. I like the gear position indicator makes it easy to determine which gear the transmission is in at a glance.

An AM/FM tuner with front two fairing-mounted 40-watt speakers is standard equipment. Easy-to-use audio controls are located within easy thumb reach on the left handlebar. IPod™, XM™ tuner and CB radio attachments are all optional. Navigation audio prompt capability allows voice prompting audio to be heard through the speakers (or Kawasaki Genuine Accessory Helmet Headsets) It sounds good cruising around town but at freeway speeds drowned out by wind noise. A set of rear speakers is also optional. Electronic cruise control is standard and controls located within easy thumb reach on the right handlebar.

This was her place, her private getaway. This had been her grandmas market for over 60 years. Her family made Tequila and this where it was originally sold. And there it was, on a shelf behind the bar, a dusty bottle from the first publicly sold batch. We talked for hours and sipped rich, fruity reposado. I’m not really sure when I finally left or what exactly happened, but I know, I needed to go back. 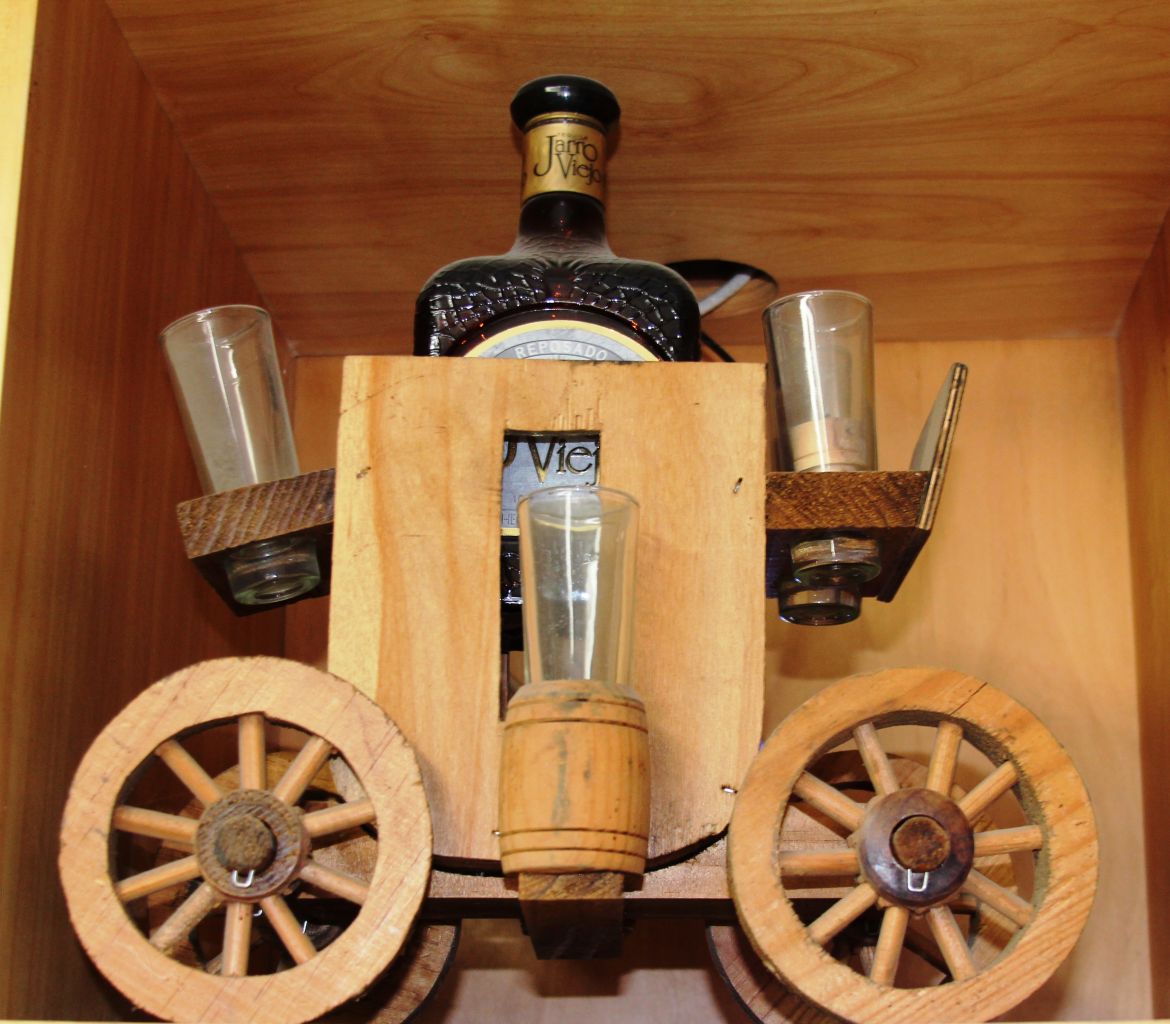 I get that not having a windshield looks cool and that all the other blacked out bad-boy baggers like the Harley-Davidson Road Glide and the Yamaha Eluder all have faux windscreens but really, if you’re going to ride a big touring motorcycle any real distances you will want a windscreen. They are easy to take on and off so that’s not really big issue. 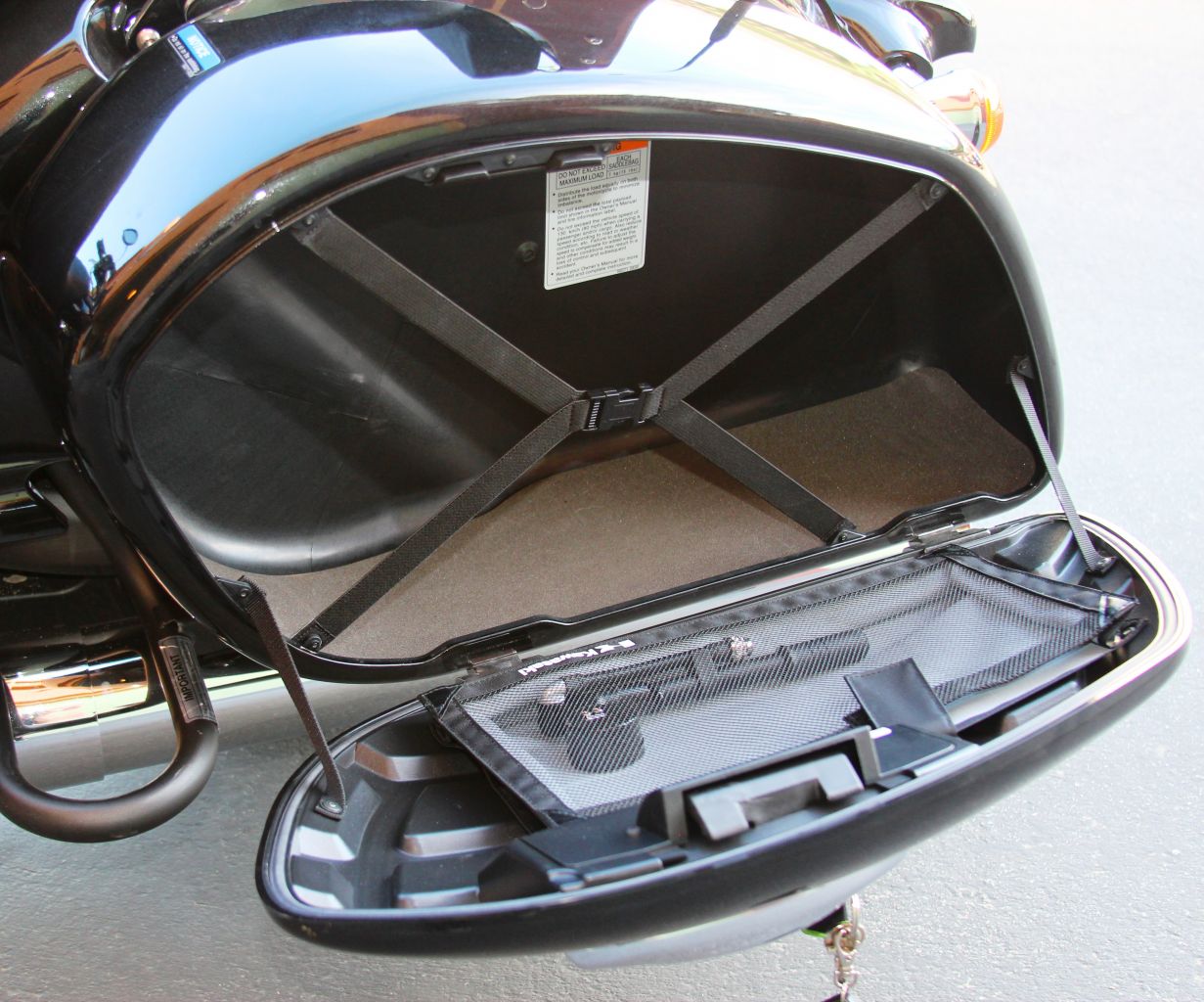 Each of the side loading saddlebags holds about 10 gallons of storage. Elastic straps secure the contents from falling out when opened. You have to open and close the saddle bags with a key so there’s really no chance of forgetting to secure the bags every time. They feel a bit cheap and the hardware is plastic.

A 5.3 gallon tank averages 40 miles per gallon which equal roughly to 200 miles. Some owners claim 220 miles but with a big bike it’s all about the speed, terrain and conditions. When you hit reserve the fuel gage light comes on and starts flashing LOW FUEL and is very annoying. I prefer a mileage countdown to zero. 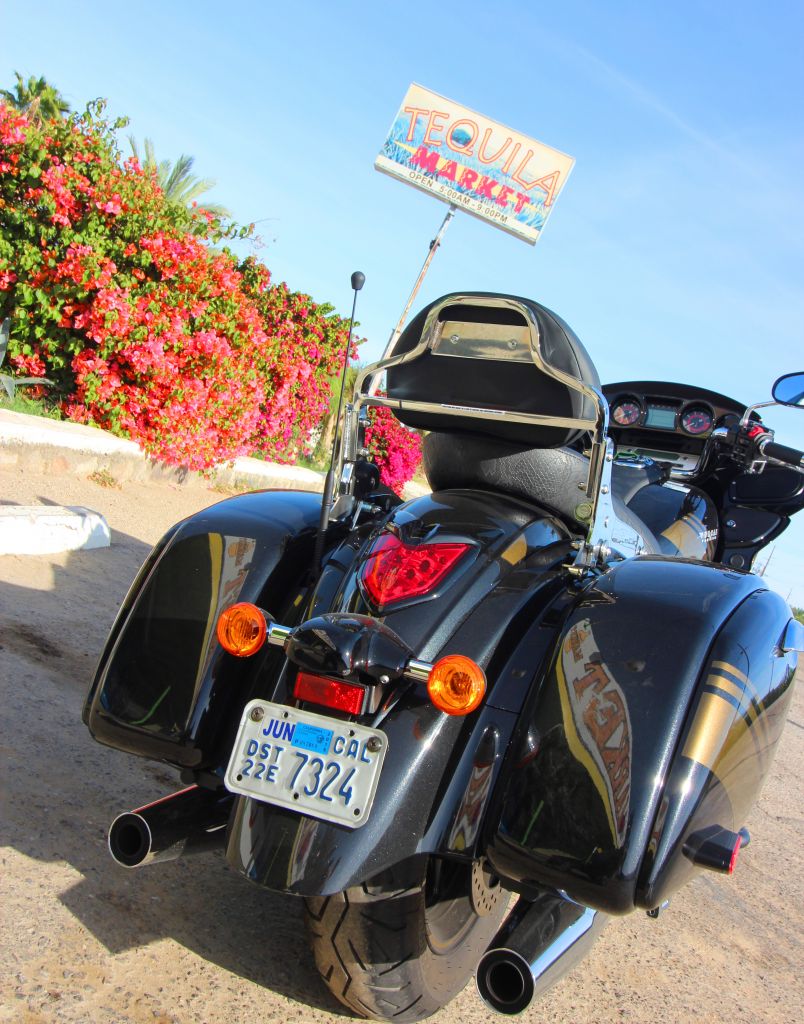 The Vaquero rides like a dream. Dual Air-Assisted Rear Shocks provide a wide range of adjustment to match the load or riding preference. The rear shocks have four adjustable pre-load setting and special spring rates to match the increased weight of the trunk and saddlebags. An air pump is optional, but highly suggested. You never want to use a gas station compressor on any motorcycle air shocks. Access to the air shocks is under the seat as are two helmet hooks.

Speaking of dreams, Eldorado?…The Nest? Will it still be there, was it ever there? Sometimes a midnight ride blurs reality and ignites the imagination. Everyone wants to find their own Eldorado, live to tell their own story and be part of the adventure.
…I’ll see you in Eldorado. 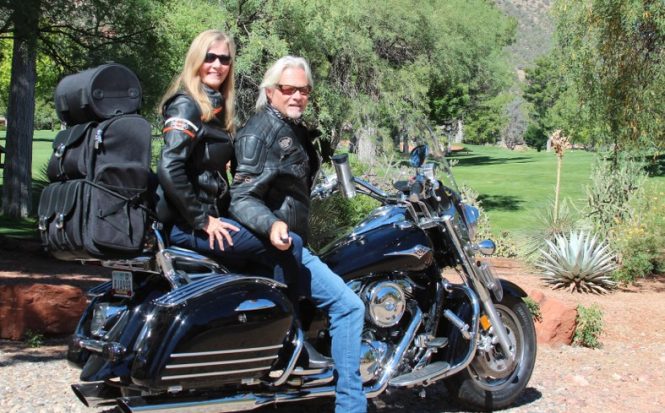 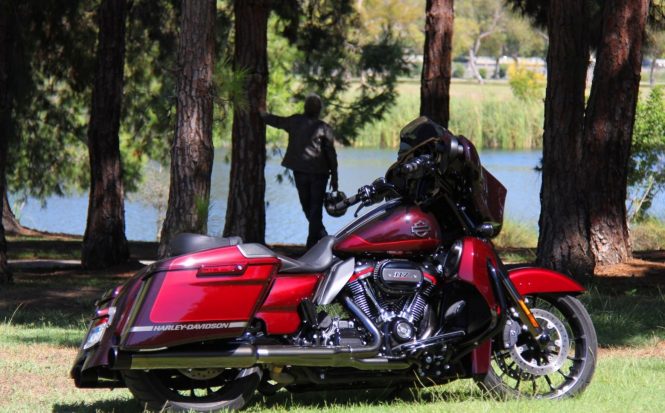 The CVO moniker is the pinnacle of all things Harley-Davidson. Custom Vehicle Operations pulls … Continued